As we near the end of a memorable and successful year, we extend our sincere holiday greetings to everyone involved in the Senior Games Movement, first and foremost to our amazing athletes and the support from their spouses, partners, family members and friends. Your example that promotes healthy, active aging makes a huge impact in your communities and on generations.
We deeply appreciate the important work done by our State and Qualifying Games. There are thousands of dedicated people involved with organizing and running 54 multi-sport events across the map. We wish you a happy new qualifying year!
We are also grateful to our sponsors, partners, and especially to the leaders and citizens of Albuquerque and New Mexico for their essential roles helping to promote and produce the 2019 National Senior Games presented by Humana. The compliments continue to come in from our participants with thanks for great games and hospitality. We now look forward to the qualifying year with our sights set on sunny days when Greater Fort Lauderdale hosts the next National Senior Games from November 5 to 18, 2021.
Lastly, if you are one of the many athletes who make a voluntary contribution to support NSGA, we want you to know how special your gesture is to us because it tells us we are going in the right direction to grow the Movement. Thank you, and Long Live the Challenge!
To make a tax-deductible donation to NSGA, please click here.

NSGA is updating and improving our website and will be switching over to the new system at within the next month. Please be aware that there will be temporary interruptions of service between December 23, 2019 to January 10, 2020. This is the best time of the year to perform this necessary maintenance, and we apologize in advance for any inconveniences. NSGA is committed to provide the best possible web experience for our athletes and supporters, and we think you will like the improved performance and look of the “new” NSGA.com. In November, the 2019 National Senior Games presented by Humana was recognized as an Outstanding Event by the New Mexico Hospitality Association at their Top Hat Awards Gala held at the Embassy Suites by Hilton Albuquerque. We are proud about what was accomplished by the Local Host Committee and the City of Albuquerque to help us make these Games among the best in our history!

NSGA is proud to have had Five Star Senior Living and Agility join our sponsor family for the 2019 National Senior Games presented by Humana with the relationship continuing beyond The Games. We will have more news about our partners next month, but we wanted to share this video which provides their perspective of what this is all about.
Click here to watch video.

We are excited to report that the Oregon State Senior Games are returning for the 2020 qualifying year, with Corvallis as the host city. Registration will open early next year for anticipated competition dates in August.
Visit Corvallis, the tourism bureau for the city, is the key partner in assembling the new host organization. “Visit Corvallis is excited to contribute to the promotion of healthy active aging by bringing the Oregon State Senior Games to our city,” says Sales Manager Morgan Baker.
Get ready, 2020 qualifying is right around the corner! Please refer to the State Information Page for most current information and contacts for qualifying Games. 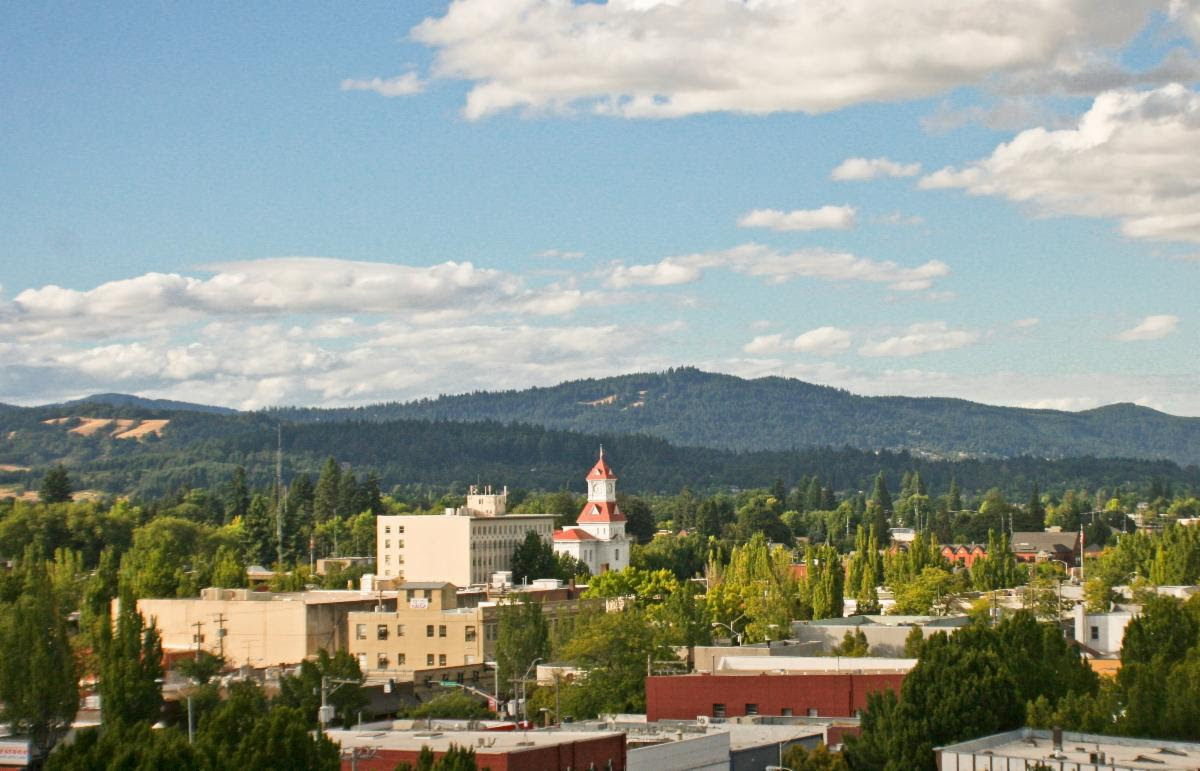 December Athlete of the Month

Bob Messersmith has built a senior basketball dynasty. The teams he has organized and coached have won the California Senior Games championship 18 out of 20 years. His Team USA has dominated National Senior Games in five age categories over the past two decades, most recently capturing gold in the Men’s 85+ division in 2019.
Remarkably, the 86-year-old hoopster, based in Orange County, California, has also repeated this success with teams in international FIMBA basketball championship play. Most competitors assume from Bob’s passion and success that he’s a lifetime roundballer motivated by the desire to win. In fact, Bob tells us that while he has an athletic background, he didn’t start playing basketball competitively until he was 61.
“I went to the University of Maryland expecting to pitch for their baseball team and ended up with a scholarship on the track team,” he recalls. He still treasures the gold watch he received when his team won the Penn Relays. He later kept up with masters track running, setting a 100-meter record at the age of 50. Bob also enjoyed playing softball for fun, and that led him to the half court.
“One of my buddies I played softball with got me to go shoot hoops with some guys every weekend,” he says. “We thought it would be great to have some competitions, and our local group grew from that.” As a retired Air Force Colonel with Vietnam experience, Bob was the right guy to recruit, coach and manage regular practices. Within two years his teams were in Senior Games and beginning to travel to national and international tournaments.
The Capo Classics, as they are called, welcome all older men from the area to join them for healthy hoops at the San Juan Capistrano Community Center gym. Dozens are signed up, and at least 25 men show up to play three times per week. While the club has helped Bob to develop excellent travel teams, he is equally proud to provide a physical and social outlet for the many men of all abilities who participate.
“We are blessed where we are. There’s a lot of guys that tell me they wouldn’t know what to do if they didn’t have this basketball thing,” Bob shares, adding with a laugh, “There’s nothing like the camaraderie and all the ‘BS’ we throw at each other, and then we go out for a beer and talk about how good we used to be.”
Bob is also proud to see that his group has spawned the next generation of players. This year, a Capo Classics 65+ team competed in the National Senior Games coached by 66-year-old Darrell Cavenaugh. “It’s good to have the younger “kids” around, as I call them,” Bob chuckles. “They got fourth place in Albuquerque, but then Darrell took his 65 team to Finland and won the FIMBA World Championship, just like I did 20 years ago.”
As much as Bob loves to win, life challenges and battles through prostate cancer and multiple hip and knee replacements remind him that having a healthy body and an active social life are the real prizes. “You realize this isn’t the biggest thing about your life. You don’t have to prove yourself to anybody,” he says. “We want to do the best we can do. If we do that, we’re comfortable. If we win, that’s better.”
The white-haired court wizard sums up his thoughts by sharing his club’s motto: “Age is a mental condition – If you want to be old, you’re old.” Bob then adds, “And we’re all re-living being ten years old doing this!”
We want to hear more great stories! To submit yours, or to nominate a fellow athlete who inspires you, Please Click Here.

Are Your Stretches Working?

Do your muscles get tight after a workout? Do you feel like you just cannot stretch as far as you’d like? While we know that senior athletes maintain better flexibility than the average adult, the challenge of staying flexible while aging is real. The tissues that allow us to move and bend freely lose hydration and elasticity over the years and require special attention in order to maintain mobility. Loss of flexibility is associated with falling, injury and poorer sport performance. Thus, better flexibility can help you perform your best with less risk of injury.
As part of the Senior Athlete Fitness Exam (SAFE), we’ve been testing the flexibility of thousands of senior games athletes. So far, we have found that senior athletes maintain overall better flexibility than their non-exercising peers. However, because senior athletes challenge their bodies more on a daily basis, they need to attend more to flexibility training.
Many senior athletes take some time to stretch but often only allow for 10 second holds. This duration has been found to be ineffective for changing tissue length. Static stretches should be held for 30-60 seconds and performed for 2-4 repetitions in order to see improvements. Additionally, static stretches are best done AFTER a warm-up or at the end of an exercise session. Stretching cold increases your chance of injury simply from stretching.
If you want to perform some stretching prior to competition or exercise, try dynamic stretching. Dynamic stretching involves repeated movements rather than long holds. Focus on movements similar to what you’ll be doing during exercise or competition and then gently and repeatedly go through those movements in an exaggerated and slow manner for 20-30 repetitions. Move more as your body allows it.
Above all, don’t stretch into pain. It is OK to feel a stretch, but pain is a sign that you’re pushing too far. Flexibility cannot be gained overnight but with regular flexibility training you will make gains. Below is a link to a Flexibility Training for Athletes Over 50 handout at NSGA.com which gives examples of dynamic and static stretches created specifically for senior athletes by Dr. Becca Jordre and a team of physical therapists.
Here’s to better flexibility!
Flexibility Training for Athletes Over 50

What you can read next

This website uses cookies to improve your experience while you navigate through the website. Out of these cookies, the cookies that are categorized as necessary are stored on your browser as they are essential for the working of basic functionalities of the website. We also use third-party cookies that help us analyze and understand how you use this website. These cookies will be stored in your browser only with your consent. You also have the option to opt-out of these cookies. But opting out of some of these cookies may have an effect on your browsing experience.
Necessary Always Enabled
Necessary cookies are absolutely essential for the website to function properly. This category only includes cookies that ensures basic functionalities and security features of the website. These cookies do not store any personal information.
Non-necessary
Any cookies that may not be particularly necessary for the website to function and is used specifically to collect user personal data via analytics, ads, other embedded contents are termed as non-necessary cookies. It is mandatory to procure user consent prior to running these cookies on your website.
SAVE & ACCEPT