Every year, NSGA attends several conferences that serve the sports, tourism and events industries. These are great opportunities to network with other event organizers and with representatives from cities that are interested in bidding to host big events like National Senior Games. It’s also a great way to continue to learn how to do what we do better.

The National Association of Sports Commissions (NASC) annual conference is one of the important gatherings we attend. Last month, NSGA CEO Marc T. Riker and VP of Association Relations Becky Wesley traveled to Sacramento for the annual NASC gathering, where they helped congratulate NSGA Board of Directors Member J.D. Wood as he received a Certified Sports Event Executive (CSEE) designation for completing the intensive sports tourism professional improvement program offered by NASC. We are fortunate to have this rising star serving the Senior Games Movement!

Game On!
2017 Registration Tops 10,000!
Birmingham’s population is about to rise significantly- at least in the month of June. We are proud to announce that over 10,000 athletes have registered to compete in the 2017 National Senior Games presented by Humana. It’s expected that the city will host well over 25,000 visitors, including athletes, family members and friends.

What kind of city builds a huge statue of a burly, bearded, bare-bottomed man to tower over its entire population? One that never forgets its roots. Vulcan, the Roman god of fire and forge, watches over all of Birmingham as a symbol of the city’s iron origins – and the ever-present spark of its indomitable spirit. It is the world’s largest cast iron statue, designed by Italian artist Giuseppe Moretti and cast from local iron in 1904. It’s also the figure you see in the logo for the 2017 National Senior Games presented by Humana. (No, he’s not throwing a javelin!)
During your visit to Birmingham, get your start at Vulcan Park and Museum, home of “The Original Iron Man.”  Up above the city, you’ll be greeted by smiling faces, incredible views, and of course, “buns of steel.”  Vulcan Center houses a comprehensive history museum of Birmingham, a local goods shop called “The Anvil,” and a visitor information desk managed by the Greater Birmingham Convention & Visitors Bureau.  Visit Vulcan and take home the spirit of the Magic City.
Vulcan Park
HUMANA Heroes: Athlete of the Month

Triple-Digit Comeback
As we often say, it’s never too late to get into The Games. It’s also never too late to set and pursue goals. This year, NSGA’s poster child for these axioms is 101-year-old Julia Hawkins, who decided to try competitive running at the 2017 National Senior Games presented by Humana after she crossed the century mark last year.
The retired teacher is running the 50- and 100-meter sprints in Birmingham, but it’s not her first National Senior Games rodeo. A lifelong bike rider, she was inspired to compete in cycling when she was 80 and witnessed local games in nearby Lake Charles. “When I saw all these older people running and jumping, throwing discus and pole vaulting, I thought it was amazing and wonderful. I just fell in love with it,” she recalls.
Julia competed in four National Senior Games, starting with San Antonio in 1995. “I got gold in the 5K and 10K time trials three of the four times I went. I quit when there was no more competition. Women just dropped off after a certain age,” she says. “But I thought I’d try The Games again after I became 100, just for the heck of it.”
“I’ve written my life story. I’ve been writing on it since I was around 60 I guess,” the spry centenarian from Baton Rouge continues. “The kids are helping with finding photos and getting it ready. I’ve done some neat things in my life, and I would like to add this to it.” Her children, now age 71, 69, 66 and 64, along with other family members and friends, plan to attend and watch this latest chapter to be added to her book.
She qualified for her sprints, as well as for the 5K cycling time trials, at the 2016 Louisiana Senior Olympics. She still enjoys biking around her neighborhood regularly, but has opted to just burn up the track this time around. “The Birmingham course is kinda hilly, and I’m a flat lander. I’m competitive, but I want to make sure I can finish.”
In a recent feature for Runners World, she explains another advantage for taking the track. “With running, it’s just me and my body. I can just go out and do the best I can and not depend on anything else to help me.”
She is gradually and carefully ramping up her training, also telling Runners World, “There is a fine line of pushing yourself and wearing yourself out. You don’t want to overdo it. You just want to do the best you can do.” Her goal is the beat her 50-meter personal record of 19:07. Regardless of time, when she crosses the finish line, she will set National Senior Games records, since no woman has run her races over the age of 100 before.
“I have a couple of people helping me get ready, but I’m not going to change much,” she concludes. “I’m gonna run like I always do.”
We’re always looking for great athlete stories! Submit yours, or nominate a fellow athlete who inspires you. Click here for the submission form.

SAFE Research Publication Update
Dr. Becca Jordre, the physical therapist from the University of South Dakota who has been driving the Senior Athlete Fitness Exam (SAFE) screening programs at state and National Senior Games since 2011, reports that the research is finding its way into more medical publications.
One aspect of senior athlete SAFE screenings that is getting attention is balance testing. Athletes were asked if they’d had a fall in the past 12 months. (Getting knocked down on the court didn’t count!) Then they tested balance by having athletes stand on one leg in a variety of conditions: (1) with their eyes open, (2) with eyes closed, (3) on a piece of 2″ foam, eyes open. Each trial was capped at 30 seconds. Other activities included sitting and standing five times as fast as possible, and walking at normal and fast speeds for 10 meters.
The research found:
This was published in Topics in Geriatric Rehabilitation, and you can link to the abstract here.  There are more results Jordre has reported. Please follow the link below to read all of the extended report.
Read the entire SAFE results article here
NSGA Online Merchandise Store
Train in Style! 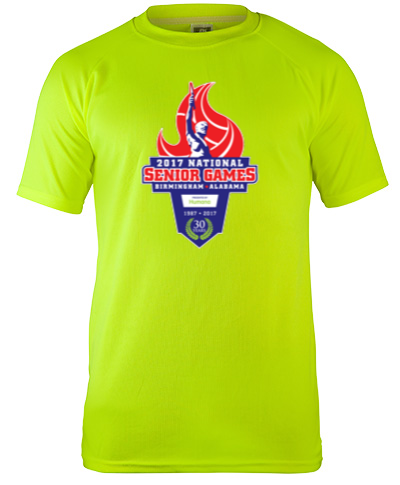 You don’t have to wait until June to proclaim you are bound for Birmingham. Be the first “out of the blocks” to wear a shirt, hoodie or other wearable imprinted with the official logo of The Games!
There are already designs on our online store for the 2017 National Senior Games presented by Humana. And it’s easy to order – follow the link below, click on either the NSGA or 2017 logo to find the various apparel types, then click “Personalize” to position and add the artwork you want onto your selection. Before you know it, you’ll be wearing it!
The Official NSGA Store at NSGA.com

What you can read next

This website uses cookies to improve your experience while you navigate through the website. Out of these cookies, the cookies that are categorized as necessary are stored on your browser as they are essential for the working of basic functionalities of the website. We also use third-party cookies that help us analyze and understand how you use this website. These cookies will be stored in your browser only with your consent. You also have the option to opt-out of these cookies. But opting out of some of these cookies may have an effect on your browsing experience.
Necessary Always Enabled
Necessary cookies are absolutely essential for the website to function properly. This category only includes cookies that ensures basic functionalities and security features of the website. These cookies do not store any personal information.
Non-necessary
Any cookies that may not be particularly necessary for the website to function and is used specifically to collect user personal data via analytics, ads, other embedded contents are termed as non-necessary cookies. It is mandatory to procure user consent prior to running these cookies on your website.
SAVE & ACCEPT